OFF TO LEH-LADAKH & SRINAGAR!

OFF TO LEH-LADAKH & SRINAGAR!

Before we start our dream trip to Leh-Ladakh and Srinagar, here is a bit of information about each of the beautiful places we are about to visit. Little knowledge about each place would make it more interesting and exciting when we visit it. Do look it up to enjoy the place more!

Built in the memory of the martyrs of the 1999 Kargil War, this War memorial was erected by the Indian Army.  It is located in the foothills of Tololing Hill and Tiger Hill- both the hills captured by the Indian soldiers from Pakistan during the war. In 2012, on the 13th Anniversary of the Indian Army’s victory, a giant national flag weighing 15 kg had been erected here. The memorial has a museum maintained by the Army. A short film showcasing the War and laying down of the memorial is also shown here. Army personnel also narrate Operation Vijay which brought victory to India in this War. A souvenir shop near the wall sells mementos and artifacts for those who are interested.

Located at 14000ft, this famous Magnetic Hill has many theories as to its existence and occurrence.

The superstition – Villagers residing in Ladakh believe that there once existed a road that led people to heaven. Those who rightly deserved were pulled to the path directly while those who didn’t deserve could never make it there.

The magnetic force theory – Next comes a sensible theory, which is also the most widespread. It states that there is a strong magnetic force emanating from the hill that pulls vehicles that are within its range.

The strange occurrence on the Leh-Kargil highway has been experienced and testified by travelers from across the world. As a matter of fact, the notorious hill has caused planes of Indian Air Force to divert their route in the past to avoid magnetic interference on them.

The optical illusion theory – Another widely accepted theory says that the hill is no source of magnetic force, rather it’s just an optical illusion that makes the downslope of the road leading to the Magnetic Hill look like an upslope. So, when you see the vehicle going uphill, it is actually going downhill.

The Gurdwara was built in 1517 to commemorate the visit to the Ladakh region of Guru Nanak Dev, the founder Guru of the Sikh faith. According to a local tale, a demon troubled the residents of the area where  the Gurudwara is currently situated. The people prayed to God for help and Guru Nanak came to their rescue. He preached and gave sermons to the locals, thus being popular amongst all. Seeing this, the demon enraged and decided to kill Guru Nanak. He rolled a large stone with the intention of killing the Guru, but as it approached him; the stone softened and halted against his back. The angered demon kicked the stone but it left an impression in it instead. Both these rocks are on display at the Gurudwara.

The Shey Monastery was founded by King Deldon Namgyal in 1655. The monastery is noted for its giant copper with gilded gold statue of a seated Shakyamuni Buddha, which is the 2nd largest in Ladakh.

One of the largest monasteries in Ladakh, this monastery is 12 levels tall. You can enjoy a beautiful view of the flood plains of Indus valley.  Statue of the Maitreya Buddha stands 2 storeys tall and holds the title of the largest statue in Ladakh.

In 1630, the monastery was founded by the first incarnation of Stagsang Raspa Nawang Gyatso who was invited to Ladakh by the King Singay Namgyal and was give estate throughout the region. 3 km away, on the side of the mountain above the monastery,  is a sacred cave which is said to have been founded by the great Gyalwa Kotsang. In this hermitage, one can witness his footprint and handprint on the rock.

One of the oldest and most famous structures, Alchi is known for its unique style and workmanship. Dating back to the 11th Century onwards, the monastery complex has three major shrines:

The Dukhang (Assembly hall): the landmark of Wheel of Life and Mahakal.

The Sumtsek : Made of loam and natural stone, the vintage woodwork and paintings in the interior of the monastery were made by Kashmiri artists. The textile work depicts the life of Lord Buddha.

The Temple of Manjushri: Consisting of unrefined paintings, each of the four images is single-headed with four arms that are adorned with a sword, a book on top of a lotus, a bow and an arrow.

This is the largest monastery and houses near about 150 Buddhist monks permanently, in earlier days the number was 400.

Built by King Sengge Namgyal in the 17th century, this nine storeys high palace used to accommodate the royal family in the upper floors, while the lower floors held stables and store rooms. This palace is also referred as Lhachen Palkhar. A statue of Lord Buddha is seated inside the monastery of the palace. Old pictures and paintings are displayed in the exhibition halls of the palace that include Tibetan thangka or sooth paintings showcasing fine designs. These paintings that are over 450 years old were created using colours derived from powdered stones and gems and till date amaze all with their rich and vivid appearance. The palace is also a house to a rich collection of crowns, ceremonial dresses and jewellery among others.

Known for the famous bullet rides, Leh offers amazing landscape view for bike rides. The 2 days that we will be in Leh, we can rent a bike (helmet will be provided) for Rs 1000 per day (without petrol) on a sharing basis amongst all of us who are interested.

Shanti Stupa is situated at a height of 4267 meters overlooking the Leh city. It gives a panaoromic view of surrounding snow capped mountains. It was inaugurated in 1991. The stupa is illuminated with lights at night. he stupa is built as a two-level structure. The first level features the central relief of Dharmacakra with deer on each side. A central golden Buddha image sits on a platform depicting the “turning wheel of Dharma” (Dharmacakra). The second level has reliefs depicting the “birth” of Buddha, the death of Buddha (mahanirvana) and Buddha “defeating the devils” while meditating. Both levels feature a series of smaller meditating Buddha relief.

Once a trade route that connected Tibet to Turkistan via the Karakoram Pass, the breathtaking valley is something worth visiting. Surrounded by the snow capped Himalayas and Leh valleys, this fairy tale landscape view lasts till you enter a desert abruptly.

Hunder sand dunes in the Nubra valley are famous for their sparkling silver sand in the cold desert, something that can only be experienced and not described in words.

The oldest and largest monastery of the Nubra Valley, this monastery was founded in the 14th century. It houses a 106ft statue of the Maitreya Buddha facing the Shyok River.

The world’s highest saltwater lake at an altitude of 4350m, Pangong Tso changes colours at different times of the day ranging from shades of blue, green, violet and red. One-third of this 160km lies in Leh where as the rest lies in China. The sunset, the sunrise, the night, in face any moment of the day looks splendid enough to just stare all day. Enjoy stargazing and the 3 idiots point- both being very famous all throughout the world.

We can rent a typical Tibetan dress from here for photographs.

Under Pakistan’s control till 1971, Turtuk came under India’s strategic areas after the Indo-Pakistan War. Turtuk is one of the few places in India where one can witness Balti culture, and one can find a few homestays and guest houses in the village. It is the last major village where tourist activity is allowed before the Line of Control.

Dal Lake is, initially, one of the most confusing parts of Srinagar for it’s not really one lake at all, but three. The floating gardens, known as “Rad” in Kashmiri, are one of the stranger aspects of Dal Lake. They’re composed of matted vegetation and earth, which are cut away from the lake bottom and towed to a convenient location where they are moored. Tomatoes, Cucumbers and Melons all grow amazingly well in these gardens, if one look underneath one can see that they do literally float on the lake.

It is situated on the left bank of the Dal Lake, Srinagar and is considered to be Kashmir’s holiest Muslim shrine. The relic was reported disappeared on 26 December 1963. There were mass protests all over the state on the disappearance of the Moi-e-Muqaddas (the Hair of the Prophet) with hundreds of thousands out in the streets. The Awami Action Committee was formed to recover the relic and was reformed on 4th January 1964.

Built in1632 by the Mughal Emperor Shah Jahan, Chashme Shahi originally derives its name from the spring which was discovered by the great female saint of Kashmir, Rupa Bhawani, who was from the Sahib clan of Kashmiri Pandits. The family name of Rupa Bhawani was ‘Sahib’ and the spring was originally called ‘Chashme Sahibi’. Over the years the name got corrupted and today the place is known as Chashme Shahi (the Royal Spring).

This temple dates back to 200 and overlooks the city of Srinagar. The temple is used for regular worship and pilgrims visit the temple during the Amarnath Yatra. The ceiling is supported by four octagonal columns, which surround a Basin containing a Lingam encircled by a snake. 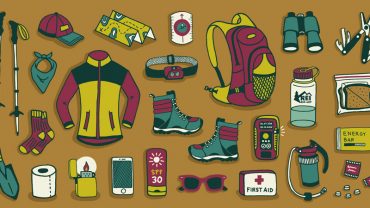 A common dilemma every trekker faces is what to carry and... 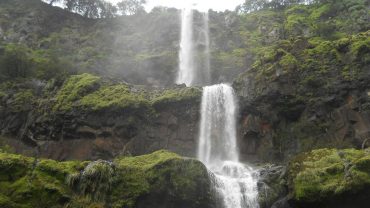 Vajrai Waterfalls One of the most hidden but majestic waterfalls in... 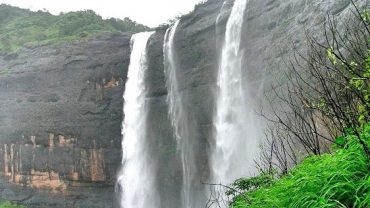 Located in the very famous Lonavala region, this trek to the...